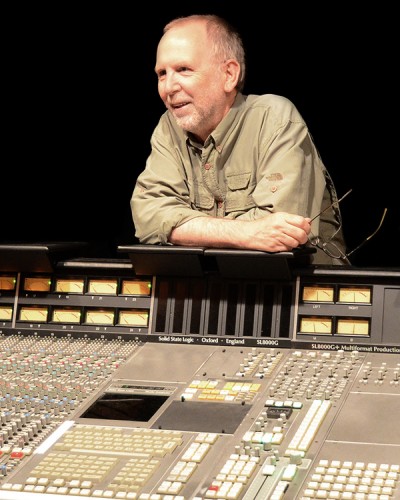 In the early 80s John became chief engineer at Hyde Street Studios in San Francisco.  There he recorded three Dead Kennedys albums and dozens of other punk, metal, and alternative bands of the era.

By the early 1990s, John received both platinum and gold records for co-producing and engineering six Joe Satriani records, including Satriani’s ground-breaking 1988 “Surfing with the Alien.”  Also, throughout the ’90s, John continued to produce and arrange hundreds of albums both in the US and abroad. It was during this time that John designed, manufactured, and sold the first commercially available reamping device called the Reamp.  He also helped design and build three Bay Area recording studios.

In 2000 John opened a CD mastering suite at the world-famous Plant Recording Studios in Sausalito. For the next eight years, John crafted his skills in the art of mastering. During his time there, John mastered over one thousand CDs for both major and independent record labels, including Tracy Chapman, Sound Tribe Sector 9, Thomas Dolby, Aaron Neville, Jesse Colin Young, and the Grateful Dead. In 2008 John won a Grammy for his mastering work on “Global Drum Project” by Mickey Hart and Zakir Hussain.

After leaving The Plant in 2008, John built a mixing and mastering studio in his home.   In this studio, he continues to work on projects for Joe Satriani, Sammy Hagar, Paul Gilbert, PJ Harvey, Chickenfoot, Kevin Gilbert, the Neville Brothers, the Funky Meters, and jazz guitarist George Cole and many others. is YouTube channel entitled “OneMic, the minimalist recording series.” In this series of eleven videos, John demonstrates how he records an entire band around one stereo microphone with remarkable results.  The series has been so successful that a new set of eight videos will be recorded and filmed at Sun Studios in Memphis and Muscle Shoals in the spring of 2018.

I have been very vocal about my dislike for The Grammys and how they have turned art into a contest. So, the below listing should not be taken too seriously.

“Don’t think about making art; just get it done. Let everyone else decide if it’s good or bad, whether they love it or hate it. While they are deciding, make even more art.” Andy Warhol